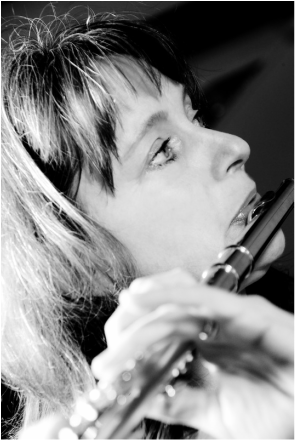 Photo by Vanessa Briceno
Robin Kani, flutist, has been described by the New York Times as an artist with “professional aplomb as well as technical authority...played with complete assurance and accuracy.” Ms. Kani made her debut at Carnegie Recital Hall after winning the Artists’ International Chamber Music Award. She has performed at Carnegie, Alice Tully, and CAMI Halls in New York, at the Kennedy Center in Washington, D.C., and has been heard as recitalist and chamber musician in live broadcasts over National Public Radio. She recorded the “Sacred Flutist” through Alfred Publishing and regularly records for Warner Bros. Ms. Kani is flute soloist on The Bethlehem Bach Choir recordings of the Mass in b minor and Christmas Oratorio. Robin is featured on the Emmy award winning PBS documentary about the Bethlehem Bach Choir entitled “Make a Joyful Noise”. She was awarded, along with her husband Larry Wright, the “Arts Ovation Award” given by the Arts Council of the city of Allentown, Pa. Currently, Ms. Kani is principal flutist of the Bethlehem Bach Festival Orchestra, Pennsylvania Sinfonia Orchestra, Allentown Symphony and has appeared in performance throughout the Eastern United States, Mexico, Germany, Spain, Czech Republic, England and Scotland. She has raised funds for the renovation of the worlds oldest Baroque Theatre in the world, which is located in Cesky Krumlov, Czech Republic. Ms. Kani performed as soloist with the Lehigh Valley Chamber Orchestra and with her husband, trumpeter Larry Wright, premiering a work written for them by Composer Steven Sametz. Ms. Kani recently premiered a flute concerto written for her by composer Larry Lipkis. Ms. Kani has performed with the Philadelphia Orchestra, Mexico City Opera, Philharmonia Virtuosi of New York, Northeastern Pennsylvania Philharmonic and as Principal flute with Philadelphia Ballet, Reading and Harrisburg Symphonies. A Review from The Washington Post gives praise such as “Soloists were outstanding, especially Robin Kani’s engaging flute”. From The Oxford Times, “There was glorious flute playing in Domine Deus…, Stalban Observer (UK) states,”The accompanying orchestra was most commendable with an idyllic solo by the young lady flautist, Robin Kani. From the Philadelphia Enquirer, “elegant flute line…Robin Kani’s expressive flute”.

From the Midwest “Ms. Kani displayed a warm, vibrant sound..supple, expressive interpretation...Miss Kani played brilliantly” (The Flint (Mich.) Journal). Of Ms. Kani’s solo appearances, “she performed flawlessly trills and runs and twitters and every virtuoso musical trick I believe the piccolo can perform. She is outstanding on the flute; she was beyond belief on the piccolo” (The Easton (Pa.) Paper),and of her performance of Michel Blavet’s flute concerto, “Kani’s flute twittered beautifully, the aural equivalent of a hover of sulpher-white butterflies” (The Morning Call, Allentown, Pa.)

A graduate of the Interlochen Arts Academy and the University of Michigan “with distinction”, Ms. Kani continued her musical studies at the Juilliard School of the Performing Arts, receiving her master of Music degree studying with the renowned flutist Samuel Baron.